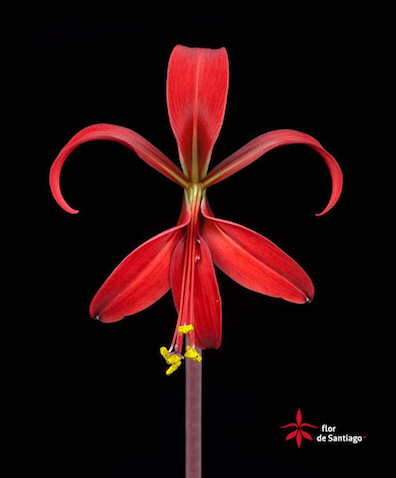 Flor de Santiago, or Jacobean Lily¹, is the name commonly given to one of the most beautiful and most symbolic flowers of the plant Kingdom. Its botanical surname, Formosissima as it has come down to us, means “pleasant to behold” (as the illustrious Swedish botanist, Carl von Linné, put it in 1753).

Flor de Santiago is an exotic flower, which blossoms on its own, with unspeakable majesty and beauty. But Flor de Santiago is, above all, “an element of symbolic communication”, bright red in colour and quite singular in shape – like a cross. The original name, Atzcalxóchitl in Nahuatl, is the first symbolic reference pertaining to this flower, which originates in Mexico, and which was always prominent in the great ceremonies of Mesoamerica, such as Cerro de la Estrella. It could also be found in many Royal Botanical Gardens, such as Montezuma II’s.

The Flower came to Spain towards the end of the XVI century, enveloped in “a wooden arch”, as part of the delicate material of the First nature expedition financed by the Spanish Crown. It was soon greeted with religious exaltation. The Flower atzcalxochitl, the most beautiful, red flower, shaped like a cross, was baptised “Flor de Santiago” , because of its resemblance to the Cross of the Knights of Santiago. The far-reaching significance of the message contained in the words spoken by Hispano-Portuguese doctor, Simón de Tovar, when that name was bestowed upon it, was immediately spread beyond Spain by the renowned Flemish naturalist, Charles de l’Écluse.

Thereafter, from the XVII century onwards, Flor de Santiago found its way into all of the most important gardens of Europe, among them the select Jardín de la Basílica de San Pedro. It immediately became a cult object among European elites, a symbol of spirituality, culture, class and good taste. Galicia was no exception. Our own and learned Friar Martin Sarmiento carefully chose the bulb for planting in his cell in the Monastery of San Martín. Sarmiento described the Flower as being of “a most beautiful fiery colour, which looks like a lily, but isn’t”. At the beginning of the XIX century, the Flower was taken by a canon of the Cathedral of Santiago, Pierre-André Pourret, to his garden in Santiago de Compostela, to be contemplated and admired.

Among other admirers of the Flor de Santiago, some of whom made mention of it in their works, are figures such as Rousseau, Thomas Jefferson, Goëthe, Bocage, Runge, Rückert, Erasmus Darwin, Emily Dickinson, and our own Emilia Pardo Bazán. Artists such as Mary Delany, Pierre-Joseph Redouté and Paul Landacre have also done beautiful botanical prints of the Flower that are worthy of mention.

The recovery, today, of the Flor de Santiago allows us to cast a new look upon its great beauty and symbolism, which are key first of all to the city of Santiago de Compostela, then to Galicia, and ultimately to the Jacobean cult as a whole.

The total or partial reproduction of this document, as well as the generation of derivative works, is strictly forbidden without the prior written approval of the creator.

This website uses cookies to improve your experience while you navigate through the website. Out of these cookies, the cookies that are categorized as necessary are stored on your browser as they are essential for the working of basic functionalities of the website. We also use third-party cookies that help us analyze and understand how you use this website. These cookies will be stored in your browser only with your consent. You also have the option to opt-out of these cookies. But opting out of some of these cookies may have an effect on your browsing experience.
Necessary Sempre Activado
Necessary cookies are absolutely essential for the website to function properly. This category only includes cookies that ensures basic functionalities and security features of the website. These cookies do not store any personal information.
Non-necessary
Any cookies that may not be particularly necessary for the website to function and is used specifically to collect user personal data via analytics, ads, other embedded contents are termed as non-necessary cookies. It is mandatory to procure user consent prior to running these cookies on your website.
GARDAR E ACEPTAR