Flor de Santiago made into a work of art 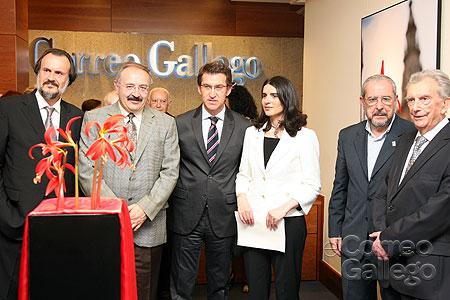 It was part of the botanical treasure of the Aztecs and was always prominent in the great ceremonies of Mesoamerica. There, in the words of researcher Ruth Varela, begins the history of the Jacobean Lily. Her study on this singular flower constitutes the core of an exhibition officially opened yesterday at the main exhibiting hall of the Grupo Corrreo Gallego Art Centre. It was presided over by Alberto Núñez Feijóo, President of the Regional Government of Galicia, for whom such an event was a “truly grand occasion”.

A natural sample of the flower occupies pride of place at the exhibition, on display in the centre of the main hall, alongside six photographs by Pablo Carreño, aimed at “underlining the importance of the flower as a symbol of the city”.

After words of welcome from Antonio Castro, President of the Council of Administration of the Grupo Correo Gallego, for whom the recovery of the plant is “nothing short of a great miracle”, writer Miguel Anxo Fenán-Vello celebrated the fact that “this jewel, this true gem of nature, has been recovered, and for the first time in contemporary history is not only being grown again, but also is the object of an exhibition.”

It is, in his words, a flower “that has returned to time and history in the most precious material form possible”. “Its first bulbs,” he explained, “were initially located in Israel, during the course of a major research and recovery project, whose dimension and symbolic importance can be gleaned from the fact that it drew upon over five thousand rigorously revised documentary sources, from twelve languages.”

In her words of presentation, researcher Ruth Varela outlined the key steps taken during the course of her research and presented a brief history of the plant.

To close the ceremony, the President of the Regional Government of Galicia thanked those behind the project for “making this flower the expression of a collective feeling”. “Few cities in the world,” he added, “can boast of having a flower as their symbol.”

This website uses cookies to improve your experience while you navigate through the website. Out of these cookies, the cookies that are categorized as necessary are stored on your browser as they are essential for the working of basic functionalities of the website. We also use third-party cookies that help us analyze and understand how you use this website. These cookies will be stored in your browser only with your consent. You also have the option to opt-out of these cookies. But opting out of some of these cookies may have an effect on your browsing experience.
Necessary Sempre Activado
Necessary cookies are absolutely essential for the website to function properly. This category only includes cookies that ensures basic functionalities and security features of the website. These cookies do not store any personal information.
Non-necessary
Any cookies that may not be particularly necessary for the website to function and is used specifically to collect user personal data via analytics, ads, other embedded contents are termed as non-necessary cookies. It is mandatory to procure user consent prior to running these cookies on your website.
GARDAR E ACEPTAR